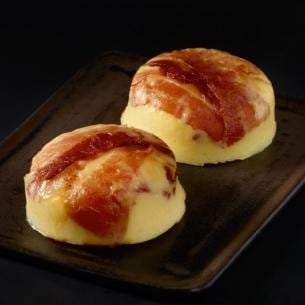 Sous Vide Egg Bites are the new item on Starbucks’ menu. Reportedly Starbucks got so many requests for egg sandwiches sans bread that they came up with a breadless egg choice. Each order of Egg Bites consists of two little discs of egg, about three bites each. They come in Bacon & Gruyere (shown), and Egg White & Red Pepper.

They are cooked “sous vide,” a method that is growing in popularity. “Sous vide” means “under vacuum,” and refers to the fact that foods to be cooked this way are vacuum sealed in plastic, then immersed in a water bath that holds a very steady temperature no higher than the desired temperature of the finished dish.  Starbucks puts the egg mixture, cheese, and other ingredients in little molds before vacuum-sealing. After all, if you just put beaten eggs in a plastic bag, then put it in a vacuum sealer, you’d make an awful mess.

Anyway, the result is little bits of eggy food that can be rewarmed in the microwave, and eaten with the fingers or a plastic fork. The texture is described as “velvety.” I have tried the Bacon & Gruyere Sous Vide Egg Bites, and the adjective is apt. The tender texture apparently comes from cooking sous vide. The Bacon & Gruyere SVEBs are quite tasty.  (I have not tried the Egg White & Red Pepper Sous Vide Egg Bites because I am opposed to the very notion of throwing away egg yolks. That’s where all the vitamins are.)

Unfortunately, two Bacon & Gruyere SVEGs — a serving — contain 9 grams of carbohydrate, none of it fiber. I assume this is because they contain both potato starch and rice starch, though no wheat, and I’m guessing no gluten. Too, the first ingredient on the list is cottage cheese, the carb count of which varies from brand to brand. If I’m eating out, I’d rather take the time to get a couple of fried or scrambled eggs and a side of bacon, hold the extra carbs.

But that’s me. I’m asking you: Have you tried Egg Bites? Would you try them? If you have, did you like them? Under what circumstances would these be your breakfast of choice? Would you eat ’em at Starbucks, or take them to go?  Enquiring cookbook authors want to know.

14 Replies to “What About Egg Bites?”