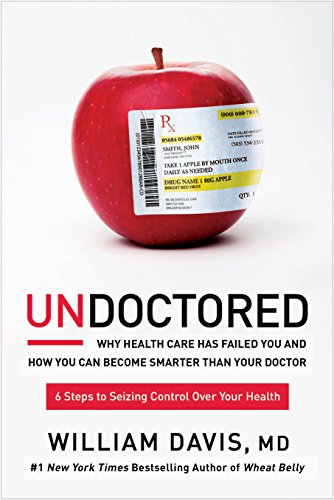 Six years ago, Dr. William Davis changed the national conversation about diet with Wheat Belly. I was lucky enough to score a review copy. I was blown away. Having been low carb for well over a decade, wheat had not been a major player in my diet for a long time. But by happenstance I had, shortly before receiving my copy, eaten wheat — in the form of two low carb tortillas — for the first time in many months, only to feel wretched for two days afterward. It was with this experience fresh in mind that I read Wheat Belly. Needless to say, low carb tortillas and wheat bread were immediately axed from my diet.

Dr. Davis has once again been kind enough to send me a review copy of his new book, Undoctored. I can only say: This is a book whose time has come.

I have for many years now been largely self-directing my health care. Yes, I have doctors, and yes, I listen to them. But they are not in charge. They work for me. When I first saw my current primary care physician, the wonderful Dr. Nuha Musa, I told her I had a few deal-breakers: She had to agree to keep me on Armour Thyroid (natural desiccated thyroid) rather than pushing me to go on Synthroid, she couldn't give me — uh, trouble — about my low carb diet, and if she ever wanted to stop being my doctor she should push me to take statins. After a look at my basic blood work, she agreed.

Dr. Musa is smart — indeed, brilliant. I value that. But just as much, I value the fact that she knows that I, too, am smart. She listens to me. She acknowledges that I know things — particularly about nutrition — that she does not. When I had an earache and she suggested the usual antibiotics, I expressed dismay, and a reluctance to kill off all of the gut bacteria I had lovingly nurtured for so long. Weren't there ear drops I could use instead? Dr. Musa was surprised but pleased at my savvy about oral antibiotics. She did, indeed, prescribe drops.*

Yet I see and hear horror stories about doctors, and have for years. In the early 1980s, I worked at an answering service (this, children, was a highly cumbersome live version of voicemail). A good half of our clients were doctors, so I talked to a lot of doctors and a lot of patients. It was one thing when doctors were rude to me, the lowly phone girl. It was quite another when a patient called in, nervous and tentative, saying she'd taken the medicine Dr. Smith gave her, but now she was worse, did I think maybe Dr. Smith would be willing to talk to her again? It took everything I had not to say, “Don't you pay him?”

In these days of social media, those stories have multiplied like mosquitos during a rainy summer. Because I write about low carbohydrate diets, I have seen story after story — diabetics told they were crazy to think they should go low carb instead of eating a “sensible, balanced diet” and taking increasing doses of medication, patients with excellent HDL/triglyceride ratios threatened with the loss of their patient status if they refuse to take statins, women with every symptom of hypothyroidism told that since their TSH tested normal they couldn't possibly be hypothyroid, it was all in their heads.

I don't think I'm simply lucky to have this kind of health care, and to enjoy excellent health as I approach 60. Yes, I'm lucky that I read Psycho-dietetics  at age 19 and recognized myself in those pages. That was sheer happenstance — the book was lying around my boyfriend's dorm room and I was bored. That part was dumb luck.

But for most of it, I credit my parents.

Mom, who eventually became both a teacher and a librarian, taught us early that knowledge was within our grasp. We went to the library weekly. And at home, we had her old World Book — a good 20-30 years old at the time, but still fine for topics like “rocks,” or “Mississippi River” or “dogs,” — a Columbia desk encyclopedia, an unabridged dictionary, Bartlett's Familiar Quotations, and an inexpensive globe. Whenever one of us asked a question, Mom would say, “Let's go look it up.”

From this, I learned not only the answer to whatever question I was asking at the time but the far more important fact that with a little digging, I could find the answer to almost any question.

From Dad, I learned to be assertive, although I hope I'm not quite the pushy, entitled jerk he could be on a bad day. (I swear to you I am not making this up: Dad's headstone reads “Let me speak to your supervisor.”)

These two qualities — the ability to find the information I want and need, and the assertiveness to state that yes, I know this particular fact, and expect the doctor to take it into account — has, I believe, led to this felicitous state of having doctors who do, indeed, treat me as the managing partner in our pursuit of my health. But not everyone was fortunate enough to be brought up as an assertive information-gatherer.

1) For years I joked that if I fell off a roof and broke my leg some doctor, somewhere would see fit to blame it on my low carb diet. Then in 2000 I was in a car wreck. My right leg got jammed into the brake pedal at 40 mph, and I had pain and tingling from hip to foot for a couple-few years. One chiropractor, having failed to fix it with three or four adjustments declared that my pain had nothing to do with my accident — I had gout from my low carb diet. I went home, went to PubMed, and did a quick search. Sure enough, the first couple of pages of studies that came up blamed gout primarily on fructose and suggested a low carb diet might well be helpful. I sent her a link and wrote her off.

2) About a decade back, my then-primary care physician, Dr. Beth Florini, expressed concern that my LDL looked a little high. I pointed out that my triglycerides were below 40, and said, “Beth, you and I both know that my LDL is a result of the Friedewald Equation, and I could lower my LDL by raising my triglycerides.” She laughed and said, “Bad idea.” )

But I have gotten off-track.

Dr. Davis has written not so much a nutrition book, although it talks about nutrition. He has written a book about how to take control of your own healthcare. Yes, a major part of that has to do with nutrition. No big surprise, he recommends you not only go gluten-free but grain-free and low carb. He recommends you tend lovingly to your gut bacteria — and in doing so has given me the first sound reason I have run across to avoid sucralose; apparently, gut bugs don't like it much. All of that is sound and useful, but probably not new to those of you reading this blog. For those, however, who have not tried these approaches, it will be a game-changer. Throughout the book are astonishing and inspiring stories of people who have experienced dramatic turnarounds in their health in a short time simply by following Dr. Davis's plan.

But in Undoctored, Dr. Davis once again gives information I have not seen before: He encourages and instructs the reader to use the burgeoning array of direct-to-consumer medical tests, the ability to search databases for medical information, access to group discussions, to take control of your own health care, to avoid unnecessary drugs and procedures, and, in general, avoid being used as a cash cow by a “health care” system that to a horrifying degree is now more interested in profit than in health.

This is an approach I wholeheartedly encourage. Just this morning, my husband was feeling not quite right. On a hunch, I googled a prescription he'd just started, and sure enough, there was his problem on the list of side effects. And those of you who read this blog regularly know I just recently got my telomeres tested.

Knowledge is power, and there are very few kinds of power more important than power over your own body. Undoctored can give you that power. If you're tired of being treated as just another piece on the medical assembly line, a spectator to your own health care, Undoctored is a must-read.

3 Replies to “Get Undoctored!”