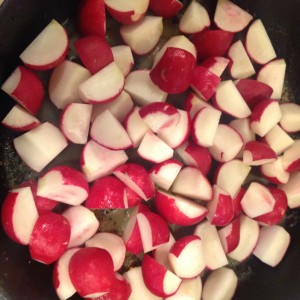 Radishes. They’ve never been a favorite of mine. Okay, I’ll be honest: They’ve generally been the vegetable I picked out of my salads. They’re pretty, they make nice garnish roses, and they’re pleasantly crunchy, but the flavor has never appealed to me.

On the other hand, a whole pound of radishes has only 15 grams of carbohydrate, and 6 of those grams are fiber, for a usable carb count of just 9 grams. There is no arguing the fact that radishes are low carb.

It started when I was working on Paleo/Primal in 5 Ingredients Or Less.  I tried making a potato salad-like recipe with steamed radishes, and it worked out nicely. I tried them chopped and fried, a recipe I named Pink Browns. They were yummy.

Then I did chicken roasted with rosemary, with radishes scattered around it, roasted in the drippings. O. M. G. To die for.

A friend of ours, Jennifer Perry, has dictated that the second Monday in September is Beefmas, to be celebrated with a fine feast of beef. Who are we to argue? This past Beefmas, I roasted a prime rib. Remembering how my mother always roasted peeled, chunked potatoes around a leg of lamb, I scattered radishes in the bottom of the pan to roast in the beef dripping. That Nice Boy I Married, also historically not a radish fan, was dubious. But we were both instantly converted when we tried the roasted radishes. They were an entirely different vegetable. I saved the leftover beef dripping and roasted another two batches of radishes later in the week. We scarfed them all down happily.

For years now — almost 22 of them — I have reflexively purchased cauliflower the way the average carbivore housewife buys potatoes: as a staple item. But since Beefmas I have been as likely to buy radishes as cauliflower.

Furthermore, trimmed radishes come in handy 1-pound sacks. To my way of thinking, this makes them easier to prep than cauliflower or turnips.

In short, they’ve become our potato substitute of choice. I still use cauliflower for fauxtatoes, but roasted radishes are now in regular rotation around here; I buy a sack or two on each major grocery expedition. And I find myself saving particularly tasty meat drippings to roast them in.

See the photos above? I had pan-grilled a rib-eye steak in bacon grease in my big iron skillet. When it yielded a few big hunks of fat, I had, in turn, cut them up and pan-fried them crisp. All of this left some mighty tasty fat in that skillet, which is what those radishes above were roasted in. It’s worth noting that because radishes are so low carb, a dish of radishes roasted in good fat is highly ketogenic, and even suited to fat-fasting.

I used a 400 degree oven, stirring every 12 minutes or so. And, just so you know, after I took the photo of the cooked radishes, I decided I wanted them a little darker, and roasted them a little longer.

I’ve also been playing around with pressure cooker recipes, and have had good success with pressure-cooking radishes with a beef roast, as well.

In short, low carbers who have been picking the little red-rimmed white things out of their salads all these years need to give cooked radishes a try. They’re a whole different vegetable.